Today we feature Jenna B.  Jenna's journey began with Ashley back in May, about 5 months ago.

Jenna decided that she wanted to lose a little weight and work through some stress management as well.  Here is Ashley's recap of Jenna's progress:

When I first met with Jenna, I wasn't really sure if I would ever see her again.  Jenna seemed to be a very driven, hardworking lady, and I kind of assumed that with as hard working she was, that she would be way too busy to take on such a huge lifestyle change.  To my surprise, she signed up for a 3-month plan and she never missed an appointment.  She was dedicated and committed from day 1.  Every appointment that we had she seemed more and more at ease with clean eating.  It was a struggle in the beginning, but after a few weeks, she picked it right up, and has not turned back.

Within a few months, Jenna was down 20 pounds, not by starving herself, or buying a weight loss product, but just by changing the quality of the foods she was eating.

After 3 months of working together, exclusively on nutrition, Jenna began adding Yoga in twice a week to her new lifestyle routine to help with stress management, relaxation, and exercise.  Then after a month of doing yoga, she began strength training with Gabby.  Since she has started doing yoga and strength training, she has dropped another 5 pounds, and lost just over 4 inches.  In addition, she has improved her cardiorespiratory fitness by 30% truly demonstrating a full lifestyle change!

To this day, Jenna is one of the most consistent clients I have ever worked with.  I still review her food logs weekly, and every week she continues to blow me away with her dedication to her health and wellness goals. 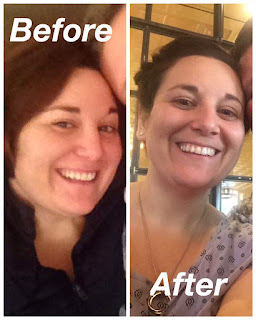 I have loved being a part of Jenna's transformation, not just on the scale, but also in her personality.  Jenna has a hard time relaxing, in every yoga class when we get to the end and drop in for our "resting pose" (or savasana/corpse pose), Jenna was always tapping her hands and looking around the room, patiently just waiting for this torture to be over.  However, the last few classes that she has come to, I have caught her closing her eyes, and finding some calm and stillness.

Jenna is learning the perfect mix of how exercise, a little calm/rest and nutrition can transform your body and mind, and we at FITness Into A Lifestyle could not be more proud of her hard work.  Keep it up Jenna!  You are such an inspiration and we are so honored to get to work with you on your goals!

Email ThisBlogThis!Share to TwitterShare to FacebookShare to Pinterest
Labels: Testimonials

This testimonial hits a little closer to home, as I wanted to do a special feature on my husband, Jake. (Disclaimer: he does not know this is being done, so all of this is coming from my point of view and own heart!). All of our relationship, since September of 2011, Jake has struggled with proper/nutritious eating habits. In addition, a exercise routine was far and in between. He would occasionally do a pick up game of basketball or racquetball with his then roommates, but nothing ever regular. As our relationship became a bit more involved and some of my personal time was devoted to the gym, he as a supportive boyfriend/fiance/husband, began to join me. 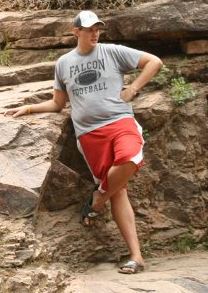 Jake has always struggled with up and down weight, but it was the year of 2015 to now that I want to talk about today. The year of 2015 was one to write home about, beginning in May/June we suffered the miscarriage of our now forever rainbow Skinner baby. In October, Jake's brother was diagnosed with stage four lung cancer and his sister was also diagnosed with breast cancer. In December, his brother lost his battle and that completed the year of 2015. With all of this diet and exercise was the last thing on anyone's mind which took a tole on the entire family.  As for Jake, it was a few months into 2016 that he found himself feeling miserable day to day as he was nearing 300 pounds! 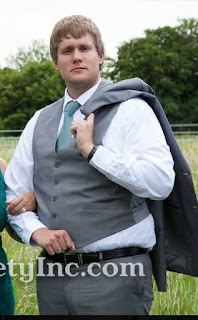 At this point, he decided that something needed to be done and this time was different. He began with assessing nutrition! By using a smartphone app to log his food intake he tracked it daily and started to see success within a month. As he started to feel better, he began running once again, signing up for his first half marathon as of September in 2016. Here he found a real passion and trained on a daily basis while still logging his food. In July, he was already down 30 pounds and had the momentum to continue!

This momentum only brought more success! As of today Jake has ran three half marathons, has meet with Ashley Ward - Nutritionist on how to improve his eating habits, has completed two juice cleanses and a 21 day clean eating challenge. He is now down to 225 pounds and inches lost can be clearly seen in the before and after pictures. Personally, I am most proud in his success in nutrition. Being a picky eater from a small age, adding greens and vegetables to his diet was a huge stretch. Now you will find him adding spinach to his scrambled eggs in the morning, as a small example! 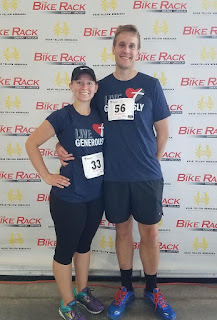 Lastly, Jake has truly made it a lifestyle change and that is what is most impressive! You can now find him running at least three days a week, strength training two days a week, eating breakfast and  adding a fresh juice containing vegetables and fruit on a daily basis. On our last trip to Denver, CO you could find Jake eating Eat Fit Go meals on our travel days to and from CO, while also participating in his third half marathon. Overall, I am so proud of his hard work, even if every day is not perfect, he continues to get back on the wagon picking up where he left off! Cannot wait for him to share his passion for running with our son come November. Great job Jake/honey, so excited to continue this happy and healthy life with you!!

Your Motivator and Companion,

Posted by Unknown at 7:33 AM No comments: